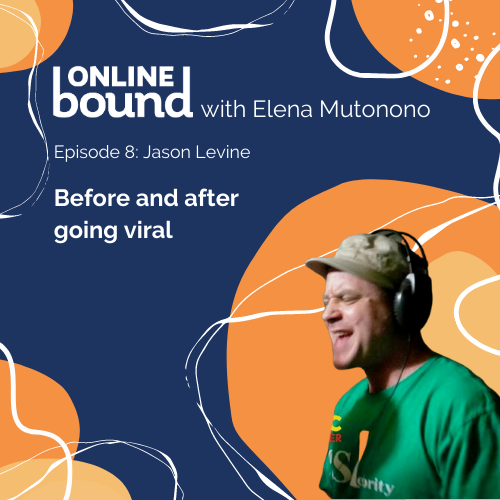 Jason Levine: Before and after going viral

In the final episode of this season, I’m speaking with an English teacher and teacher trainer Jason Levine, also known as Fluency MC. Jason’s unique approach to teaching English through hip-hop songs that he writes and performs made him go viral and changed the course of his career and life.

Tune in to learn more about Jason’s story and what he learned about creativity, marketing, and following your passions and staying true to yourself instead of doing what everyone else does.

Listen to the episode

Discussed in this episode:

Jason Levine (Fluency MC) has more than twenty years of experience as an English teacher, teacher trainer, and materials writer. He has led student workshops and teacher training programs in twenty-one countries in Europe, the Americas, Africa, and the Middle East.

Originally from the United States, Jason currently lives in Paris, France. He conducts workshops in France and worldwide for primary, secondary, and university students based on the songs he writes and performs as Fluency MC.

Jason has published materials with Oxford University Press and Editions Didier. His self-published Fluency MC Song and Video Activity Book was a finalist for a 2017 British Council ELTons award. “Stick, Stuck, Stuck,” Jason’s song and video to practice irregular verbs, has been viewed more than 50 million times on social media.

How you can support this podcast

If you like this podcast and find it useful, you can support it in the following ways:

Free ways to support this podcast

? Write a review on Apple Podcasts. Reviews are super important for the algorithm and help more people find the podcast.

? Share it with someone who may find it useful. The link to the podcast page is elenamutonono.com/podcast

We use cookies on our website to give you the most relevant experience by remembering your preferences and repeat visits. By clicking “Accept”, you consent to the use of ALL the cookies.
Cookie settingsACCEPT
Manage consent

This website uses cookies to improve your experience while you navigate through the website. Out of these, the cookies that are categorized as necessary are stored on your browser as they are essential for the working of basic functionalities of the website. We also use third-party cookies that help us analyze and understand how you use this website. These cookies will be stored in your browser only with your consent. You also have the option to opt-out of these cookies. But opting out of some of these cookies may affect your browsing experience.
Necessary Always Enabled
Necessary cookies are absolutely essential for the website to function properly. This category only includes cookies that ensures basic functionalities and security features of the website. These cookies do not store any personal information.
Non-necessary
Any cookies that may not be particularly necessary for the website to function and is used specifically to collect user personal data via analytics, ads, other embedded contents are termed as non-necessary cookies. It is mandatory to procure user consent prior to running these cookies on your website.
SAVE & ACCEPT