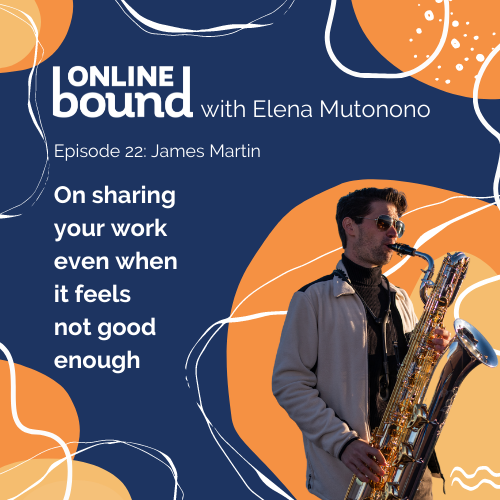 James Martin on sharing your work even when it feels not good enough.

In this interview with James Martin, we talk about the source of joy and creativity, about motivation and perseverance through difficult times, and the art of sharing your work when it doesn’t feel good enough.

James shares his creative process, which he likens to a faucet that you must never turn off. He encourages us to stay open and keep generating ideas even if you don’t use them at the moment.

We also talk about the COVID pandemic, how he coped with the loss of income, and how he was able to find hope and joy in the midst of hopelessness.

Listen to the episode

Saxophonist, singer, and songwriter James Martin is an accomplished and award-winning solo artist, band member and touring musician whose 19-year career has brought him international acclaim several times over.

Beginning his career at the prestigious New Orleans Center for Creative Arts where he became a founding member of classmate Troy “Trombone Shorty” Andrews’ Orleans Avenue, alongside Jon Batiste. Martin earned a full scholarship to Loyola University with a double major in Jazz Saxophone and Music Industries. During his seven-year tenure with Orleans Avenue, he and the band released three albums, some of which included original music contributed by Martin.

Most recently, his solo work with the James Martin Band has led him to performances at the Edinburgh Jazz & Blues Festival; the Copenhagen Jazz Festival; the PaP Jazz Fest in Haiti; the Spiagge Soul Festival south of Venice, Italy; the New Orleans Jazz Festival in Tel Aviv; Fort L’Ecluse Jazz Festival in southern France; the Ascona Jazz Festival in Switzerland; as well as regular performances at renowned New Orleans venues including Tipitina’s, The Spotted Cat Music Club and Carousel Lounge. The James Martin Band’s third album, “Keep Movin’” (with the cover Rectify that you hear at the beginning and the end of our podcast), debuted at #9 on the Billboard Contemporary Jazz Chart.

Martin has been an integral member of several other bands, including the award-winning Ernie Vincent and the Top Notes, the Billboard charting Glen David Andrews Band and Soul Brass Band. With the globally touring Soul Brass Band, Martin serves as a writer, arranger and singer in addition to instrumentalist. The band released Levels, produced by Galactic’s Ben Ellman, in early 2019. Along with Soul Brass Band co-founder Derrick Freeman, Martin graced the cover of OffBeat Magazine in 2018 and has been nominated Best Saxophonist at OffBeat’s Best of the Beat Music Awards several times.

In addition to performances and recordings with Ivan Neville, Flowtribe, Amanda Shaw, James Andrews and many other prominent musicians, Martin contributes original music to CBS’ “NCIS: New Orleans” and has been heard on Anthony Bourdain’s “Raw Craft,” as well as on Abu Dhabi TV. On Abu Dhabi TV, Martin hosted Middle Eastern composer Faisal al Saari in New Orleans, where the pair collaborated in a recording studio and live performance. Martin appeared on the award-winning HBO series about post-Katrina New Orleans, “Treme.” He earned nationwide recognition for his 2011 appearance alongside acclaimed fiddler Amanda Shaw during the intro segment for ESPN’s “Monday Night Football.”

How you can support this podcast

If you like this podcast and find it useful, you can support it in the following ways:

Free ways to support this podcast

Other ways to support me

We use cookies on our website to give you the most relevant experience by remembering your preferences and repeat visits. By clicking “Accept”, you consent to the use of ALL the cookies.
Cookie settingsACCEPT
Manage consent

This website uses cookies to improve your experience while you navigate through the website. Out of these, the cookies that are categorized as necessary are stored on your browser as they are essential for the working of basic functionalities of the website. We also use third-party cookies that help us analyze and understand how you use this website. These cookies will be stored in your browser only with your consent. You also have the option to opt-out of these cookies. But opting out of some of these cookies may affect your browsing experience.
Necessary Always Enabled
Necessary cookies are absolutely essential for the website to function properly. This category only includes cookies that ensures basic functionalities and security features of the website. These cookies do not store any personal information.
Non-necessary
Any cookies that may not be particularly necessary for the website to function and is used specifically to collect user personal data via analytics, ads, other embedded contents are termed as non-necessary cookies. It is mandatory to procure user consent prior to running these cookies on your website.
SAVE & ACCEPT